Spooky Scary by Spraynard (from the Pink Couch Sessions via IfYouMakeIt)

It’s been a goddamn wild October. So wild that I really didn’t have any time to sit down think about how fast things were moving again. This blog post is probably going to be half for me and my memory, and then half for others. Pieces are probably already missing, but that’s fine. The important parts should be still be here.

One of my good friends got married this this past month. I’m not sure if it’s destiny, but they were and always have seemed pretty perfect together. Dragging myself to Chicago to see them was an utter comedy of errors though:

We made it! It was an exhausting day and night but it was fantastic seeing so many old friends all in one place. I had a great time going out with them in Chicago too. Despite living in Illinois for six years, I effectively knew nothing about Chicago. I still barely do, but I had a great time hopping around the bars and restaurants in… Wicker Park? Eh, how should I know.

We did the things you needed to do and it… actually happened! We practiced songs, and even wrote one! I rented a drum kit and hauled it all the way up to some random forest near Lake Tahoe. All our friends showed up, and for twenty minutes, that forest was ours. It’s one of those amazing experiences where you just completely and utterly black out for a hot second and then voila, the set is over.

All your friends are cheering. Your hands are shaking. You remember that it’s really cold and you can see your breath. Well, not really. You can’t see anything. Did your breath fog up your glasses? Are the “stage” lights blinding you? Is it just pitch black out? No, you just a threw down a punk rock set so hard your brain needs a little bit to catch up.

Thanks so much to everyone else who was in the band for making my dreams come true. 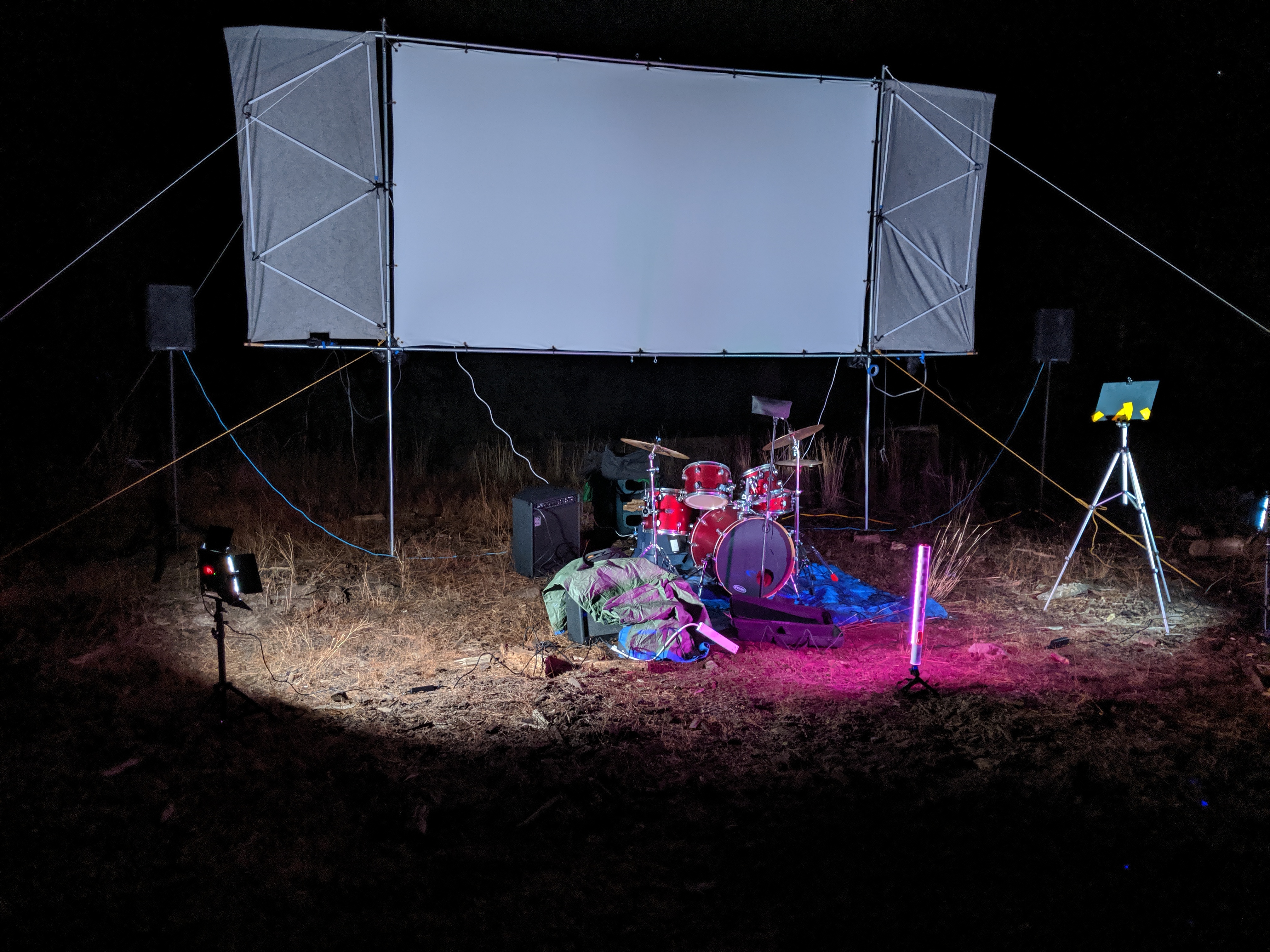 Cut Your Hair by Pavement

I got a promotion at work. This was pretty cool - I now manage a team! I think this is terrifying and exciting and a major source of anxiety. I have so many feelings about this. On one hand, I’ve basically been doing this job for months (or years) already. Sometimes people ask how that happens. Well, it’s pretty simple in startup land. You just end up doing what you need do to right? If there’s a gap, fill it. We had a big gap in senior EE for awhile, so I stepped up and filled it.

Now I have to figure out how to do it in a slightly more formal way. Except I’m barely interested in that at all. Only posers die so who wants to start selling out? Not me. My biggest leadership role to date was managing my IEEE student branch in undergrad. We had three separate divisions: Technical, Professional, and Social. I always strived to be The Most at all of them. That’s what being UIUC IEEE President meant - not just being smart in your classes, but also being able to knock down half a dozen drinks every Friday at happy hour. Some might argue that’s not professional, but I got to have the final say there.

I no longer have the final say there. Do I have to cut my hair? Hell no. Do I have to watch my language? Maybe. Do I have to be more conscious in how I introduce myself? Yes. Somewhat ironically, maybe confidence will be the thing I need. I love self-deprecating intros and generally putdowns. Humanizing people is critical, and you can’t do that from a lofty throne. Maybe sitting on the first step will strike a useful balance.

This is the big one though. It’s not like I aimed to save the best for last, but it’s just how these things fall out sometimes. The FEST is a three-ish day musical festival that takes place in Gainesville, FL. The music is punk rock, punk rock, and punk-rock-inspired punk. This was the 18th year they’ve had it. I’ve been wanting to for a few years, as I’ve heard awesome stories from my friends who have been. I tried wrangling up people this year, but it didn’t pan out. So screw it, a solo trip to Florida and crashing on a stranger’s couch is pretty punk rock right?

The first day of the festival was November 1, so I had to fly down on the 31st. I had some major jealousy about not being in the office, since apparently they turned it way up for Halloween this year. All my friends were rocking dope costumes and I was just bored sitting on a plane for six hours. By the time I landed in Orlando and picked up the rental car, I had been traveling for around 8 hours and was ready to rock. Still had a two and a half hour drive to go though, and that’s where I officially started losing it / FEST-ing.

I don’t think I realized what I was getting into until an hour or so into that drive. My hand finds the volume knob and doesn’t let go. Another song, another click of the dial. Every time I passed a car I would let out some energetic roar:

In my dreams, this swamp infested highway was strictly reserved for anxious weirdos. A caravan of loners descending on Gainesville.

It’s impossible for me to describe how I felt during each and every moment. Even just a week later, I’ve probably forgotten some of those emotions. Here’s who I got to see. Please listen to at least one new band from this list. The scene is kept alive by curious punks, do your part: 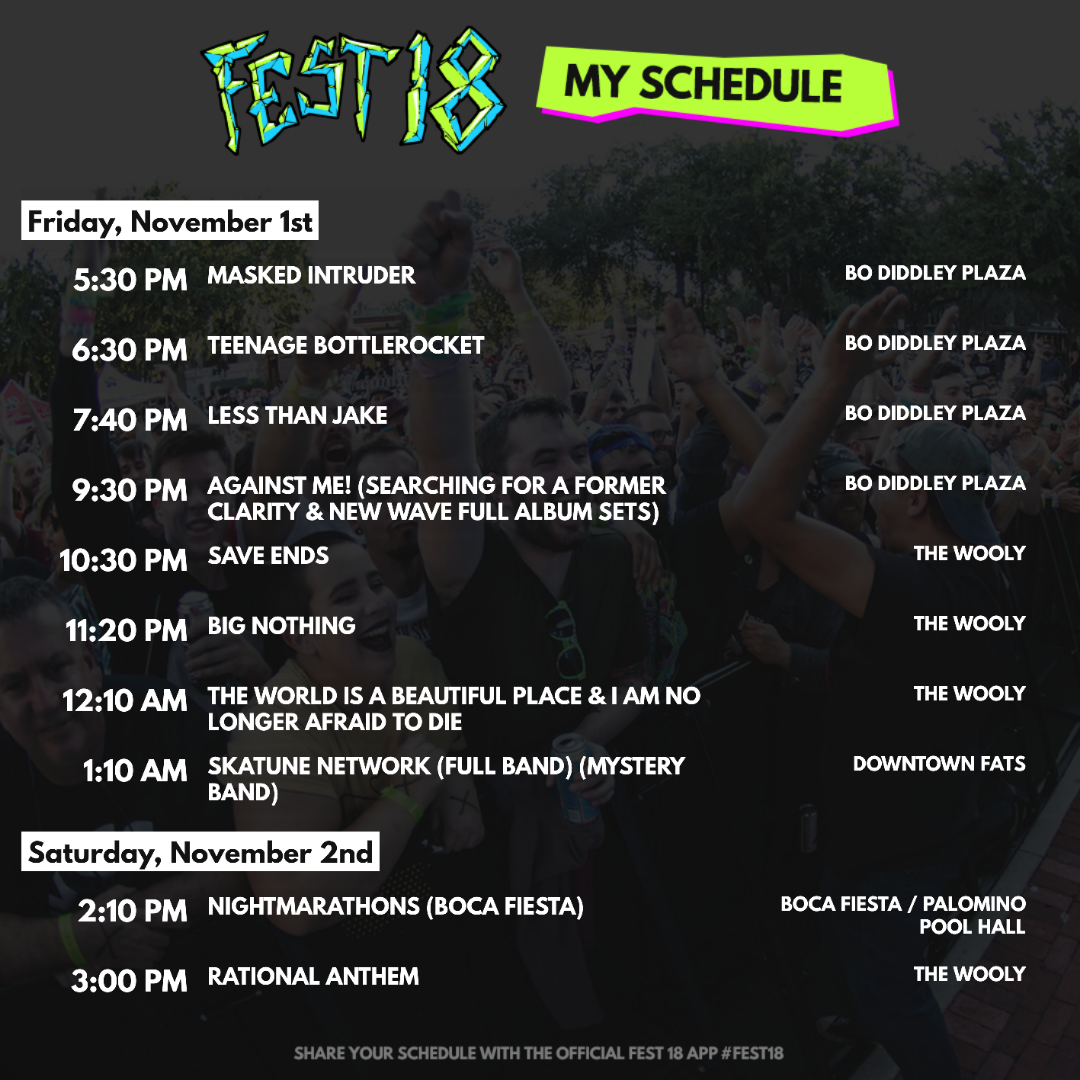 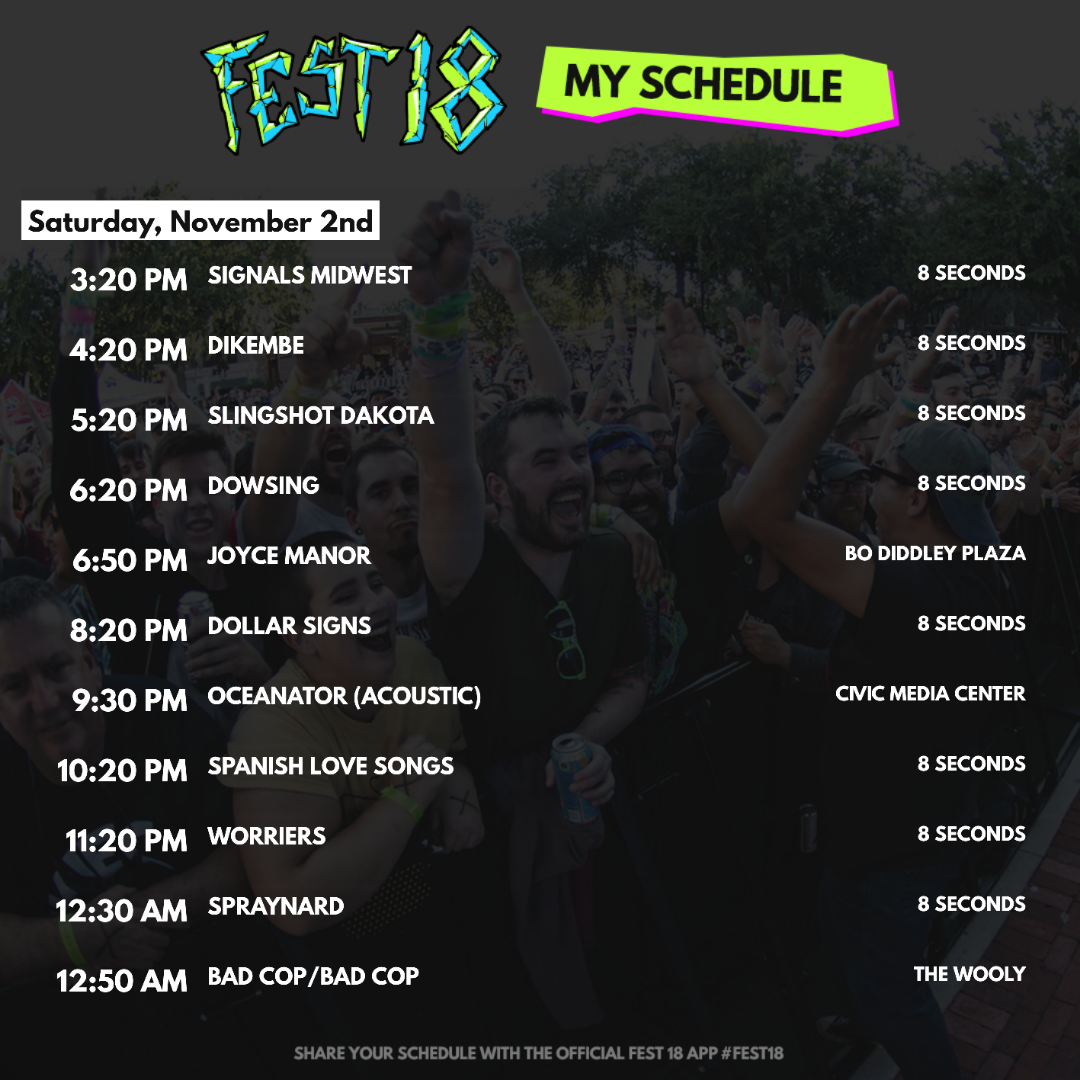 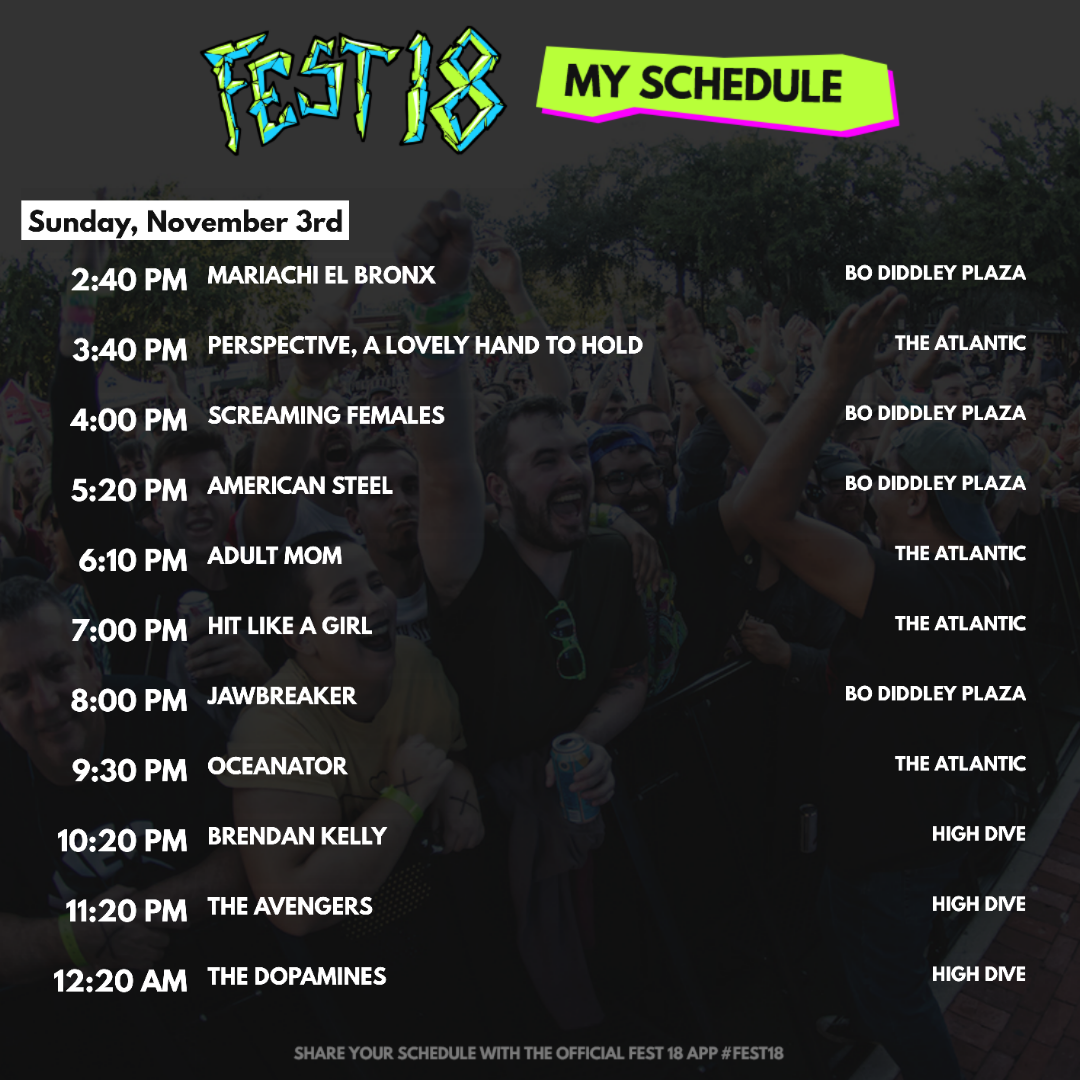 The easiest thing to start with is the beer. This whole damn festival is sponsored by PBR. That’s not a joke, literally the tier 1 sponsor is Pabst. $3 tallboys everywhere in the city and they can’t be missed. I half-jokingly set a goal of drinking a whole 30 rack in one weekend. I actually got to 28, which is an absurd amount over 3 days. I was basically in a buzz from 2PM to 2AM most nights. PBR is kind of a meme at my office (thanks to me), and I don’t really care. Still, it’s something as small as the staff handing out PBRs while we’re waiting in line to pick up our registration tickets. That is probably not the textbook definition of community, but how can it not feel like home?

So many of the bands I saw had a bit. I hate using the word “gimmick” since it has this tacky and insincere feel. There is nothing more sincere than punk rock, and just because you’re pretending to be someone else doesn’t make it any less so. Some great acts:

These acts could be dumb jokes somewhere else in the world. Someone could show up, find it kind of funny, laugh a bit, and just walk away. But if you just suspend your cynicism for a brief 40 minute set, wow, you walk away with something powerful. What’s even crazier is meeting your heroes after their performance I got to meet and say hi to so many people that were/are important to me. I ran into:

I didn’t seek any of these people out, they were just hanging out watching all the other amazing music. Are they just normal humans in between sets? Yes and no. Sure, they don’t have this weird air of superstars. There was no line to talk to them. You just turned around and said “oh hey, aren’t you so-and-so from that band?” Maybe this was kind of their peak too honestly. I had seen quite a few of these bands before, but they were playing to incredibly small crowds. At FEST they were playing to massive audiences every night. We got to make them feel like heroes, and in doing so, I got to meet the version of them I wanted them to be.

My valley was probably Saturday night. Spraynard was playing. This band means so much to me. Not only do they make amazing, heart-wrenching anxiety filled punk anthems, but they live it. The band is famous for being shy of fame and just not wanting to play sets. They hate getting up in front of the crowd. When they hit that stage, they immediately went for it. “Hey everyone, thanks for coming. It’s great to see you. Be safe, take care of each other, you know how this works."

Do you know that feeling when you finally get something off your chest? How nice it feels to just get it out of body in an almost physical way. To just tell someone what’s really going on. This show was like that, but with hundreds of random strangers. Pat and the rest of the band reached down our throats, found that heavy iron ball of anxiety, and ripped it out. You could see everyone’s failed test, their disappointed parents, the lover’s rejection, the broken promises, it was spraypainted across their faces. Could you escape it? Probably not, but the only way to find out is to start running. Left or right, clockwise or the other way. Crowd surf up and fall down. Don’t let a body stop you, don’t let anybody stop you. Don’t stop or it might catch up to you.

For 40 minutes we got to escape. Of course, the set was supposed to be 60 minutes, but that’s what you signed up. What’s left to do? Juggle all these emotions in your arms and awkwardly walk back. They’re slippery but you can’t let go, it’s a struggle to carry all of them. Alone, in a strange city. You just remembered it’s cold out. None of your friends are really here, they’re half a world away or more. Mumbling song lyrics as if they were prayers for protection.

My punk peak was probably the very last night, at the very last show. The Dopamines were playing and they are raucous. Everyone is standing around, drinking their beers, waiting for the last set. Voila, The Dopamines take the stage. They enjoy getting up there, heckling a bit, making sure it’s going to be party. Is anyone really going to turn it down at the 72nd hour? No, rage against the dying of amp. The band begins, the crowd starts going. The guitar slams a heavy riff down, the beers go flying. I grab a PBR out of the air (in reality, it fell into my chest). A higher power temporarily asserts control - to waste is sinful after all. I slam it back, approximately half down my throat and half over the rest of my chest. The crowd goes wild, and in that moment - nope, it’s over. The spirit remained in the same spot, but my body is now rapidly traveling in a new direction. You can’t break momentum.