Lauren (Track 2) by Prince Daddy and the Hyena

I got a new tattoo last Monday (8/19/2019) at Mission Ink. I had been thinking about this tattoo since senior year of undergrad maybe? I tried to dig up the original image but have never been able to. I texted it to a few friends but oddly, none of them remembered. It’s not like it’s been four years or anything. Gross how fast time flies by – glamour shots ahead. 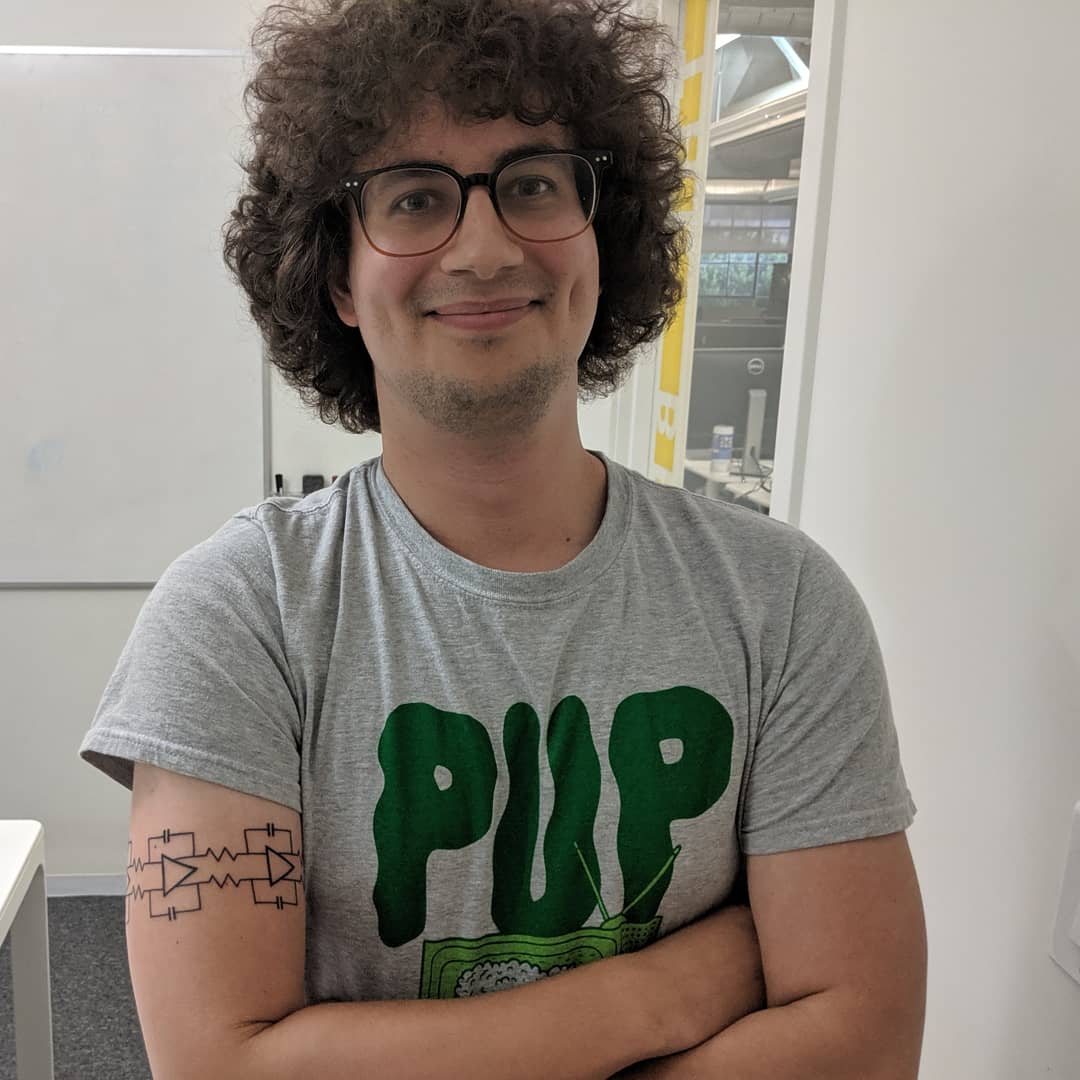 What is it? It’s an arm band. It’s a five stage differential integrator. It’s a schematic, captured. It’s a low pass filter. It’s an oscillator. It’s a part of me, forever now. That last part isn’t new though - it’s just visible now. To step back a bit, my tattoo stance is pretty straight forward: Find a defining event, wait a few years, get a tattoo if it’s still important to you. Defining is a great word! It supersets so many others words like {traumatic, exhilarating, important}. We’re all defined by our successes and failures, and usually the end result isn’t that important. I just want to remember the time spent.

All electrical circuit design comes in two parts: schematic capture and layout. Schematic capture is a truly beautiful turn of phrase that I always felt was critically under-appreciated. When you design a circuit, you have to figure out how to steer these invisible streams of nanoscale ions, atoms, and particles. Somewhere along the way, you top out on the abstraction ladder into something that other people can follow along. It looks nothing like real life, nor physics, nor anything besides a weird in between language we all agree to speak. We call this the schematic.

Once you’re done with that, you say you’ve captured the schematic. I imagine myself running around with a net trying to catch butterflies or jellyfish1 or ideas. These objects are floating around but they’re quick and ephemeral. Actually being able to touch one and claim it for yourself is a truly magical feeling. When it’s done, you’ve taken the abstract and made it real. If that’s not art, what is?

Modern life is defined by noise. I hate my phone. It buzzes and twitches, interrupting me incessantly like Harrison Bergeron come alive. I can’t watch a video without a screaming, brightly covered pre-roll. I can’t take a ride on the subway without being assaulted (or perhaps manipulated?) by slowly changing LED walls of advertisements. If I was truly conscious of all of these, every day, I might die. It’s a complete and utter saturation of the senses. This is all high frequency noise. It never lasts more than a few seconds and usually changes faster than it. There is more of it than I could possibly ever remember and then we’re both on to the next one.

I first learned about these types of circuits sophomore year, in Prof. Makela’s class2. When he explained a single-ended version of this circuit, I could feel my brain unlocking a new level. Fourier, Laplace, Bode - these words stopped being mathematical concepts and instantly became tools. Mental sparks flew and the world changed forever on that day.

My thesis was tattoos are defined by events. So what was this event? It was my thesis, of course. A chip tape-out in grad school, but as the last part began to explain, it was my entire Electrical Engineering education. The more I’ve learned, the more I appreciate everything in the modern world. There is a switch on the inner part of my arm. When that switch is closed, this turns into an oscillator.

Oscillators are truly magical circuits in my opinion. They have no real input3, but you can say any node is the output. They create new signals without being asked. They take the ever-present noise in our modern world and convert it to something useful. They are a magical feedback system that takes literally nothing and amplifies it as far as it can. If I had to describe what this piece meant to me, it’s exactly what I would say if for any feedback circuit:

it’s easy for things to get out of control