I normally try to think of original titles, but this one was simply perfect.

George Orwell introduced the dictator Big Brother in his novel 1984. as I’m sure you know. The book was an allegorical treatment of Stalinism, of course. And ever since then, the term ‘Big Brother’ has functioned as a social icon. That was Orwell’s great accomplishment. But now, in the real year 1984, Big Brother is all too famous, and all too obvious. If Big Brother were to appear before us now, we’d point to him and say, “Watch out! He’s Big Brother!” There’s no longer any place for a Big Brother in this real world of ours.

I started reading again last year and I’m so utterly grateful for that. There are so many people who are so much smarter than me - not only can they say the same thoughts that I think are unique to my brain, but they can do it in an organic way. I used to think the only way to do that was in song, but I’ve come around to prose as well. The above quote has resonated with me for the past few months. I have had a long struggle of admitting to my fears or other insecurities. Murakami lays it out so simply and so bluntly: all these fears are just fears of the unknown. What is known is not terrifying, it simply is. Fear is best disinfected with sunlight.

I have a lot of fears, I think most people do. I hate spiders and insects in general, they gross me out. Too small, could be anywhere. Hate em. Heights freak me out and I always get a little shaky when I can see more than a 10ft drop. Needles unnerve me, along with nearly anything related to the human body internals. I’m fairly transparent about these (aside from the time I lied about not getting the flu shot). There’s a massive one that’s been on my back the entire time and I’ve been too ashamed to bring it up. Time for some rays of sunshine.

I have a massive amount of student loans, with the net total amounting to approximately $245,000 once I finished grad school and really peeked under the dark covers. What I’m not interested in talking about is how that happened or why. This isn’t the kind of thing you can simply point to and assign blame. I used to alternate between blaming everyone (usually including myself) and blaming no one (rarely including myself), but now I try to cut that line of thinking off as soon as I can. What I want to talk about is 1) the facts of the situation and then, 2) how I feel about it.

The facts are somewhat horrifying, but I want to remind myself that they are only facts for now. I haven’t been able to find an exact percentage, but it’s clear that my loan amount puts me between around the 99th percentile of student loan debt1. In my age group, apparently there are near 16 million with student loan debt2, so that gives me about 150,000 people who I can relate to. If you extend towards any age, it gets to over half a million people. So, as a fact, I am not alone in this.

Here’s another fact: it is not impossible for me to pay this loan off. I got my loan refinanced and it sits at a 15-year repayment period. That is a large but quantifiable amount of time. April 2034 will come and (despite my best attempts to die before I get old) I will be here for it. If I take any extra money I have (tax returns, apartment deposit, etc) and throw it at it, the end time drops accordingly. I can see this real effects of this when I plot it:

Let’s slowly transition from facts to feeling. The above plot is depressing, since it shows a plateau. A frozen, static end date that only shifts with effort that goes above and beyond. It hides the fact that each day I’m making numerous life decisions based on this simple fact. What if I show it as days left instead?

This one gives me slightly more hope? The number still makes me uncomfortable, but the trend means I can sigh and march onwards, rather than curl up and feel buried. Focusing on strictly on this student loan isn’t totally healthy though. There’s lots of other stuff going on in my life money wise: rent! food! concerts! life! What happens when we look at that? 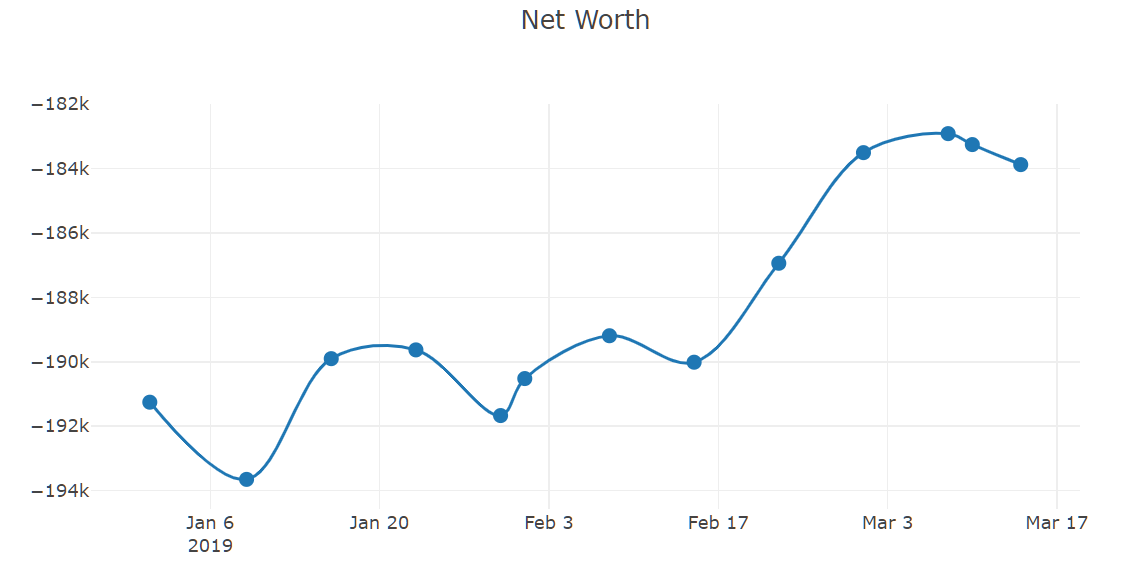 This is the one that really inspired me to write this post. I hate this graph more than anything. When I think of this number, I want to run and scream. I restrain from punching doors and kicking walls. I stop myself from ripping my shirt in half and throwing up. I ignore everyone who messages me. I turn the music up and I tune out. I start screaming in my head and sometimes into my bed.

I don’t care that the trend is up, or even if it’s “pretty fast”. All I see is a massive negative number that screams out “your life, so far, is a failure.”. I can’t fight or argue with the number, it’s a fact. I’ve made so many decisions in my life and this number is just telling me that I’ve been wrong, every time.

I am finally fighting back against this number. That number doesn’t know anything about the knowledge I’ve acquired. It doesn’t know anything about the places I’ve been. It will never know the songs I’ve written and it can’t know a damn thing the amazing friends I’ve made. I set up a website where every time I’m feeling down, I can go look at these plots. I’ve resolved to add $today()'s data point every time I feel the need to go on that website. The goal is over time, I will realize that this number doesn’t mean that much. Hopefully I’ll forget about the website.

This number does not define me, and I am so much more than it. That concrete pillar that has been weighing on my back is suddenly turning into wisps of smoke when wrested into the sunlight. There is no place for it anymore.